By William of CrossDove Writers

It’s been a while since I wrote anything pertaining to our youngest family addition – our Maltese puppy Frosty Lou – but this last few months finds him having several moments of near confusion and frustration. 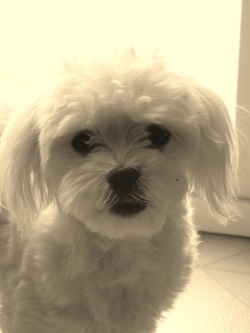 The confusion began back in early May when we had a weekend where my wife was heading to Colorado for a short trip with our oldest daughter, while I stayed home to attend our oldest grandson’s high school graduation. This meant we had to figure out a game plan for Frosty Lou, since he could not travel with the wife and I would not be able to take him with me to graduation.

Since the local pet daycare did not take drop offs on the weekend, we ended up leaving him from Friday afternoon until I was able to pick him up late Sunday afternoon, the only time one could pick up a dog left there during a weekend stay.

Of course, when I picked him up, he quickly realized that Yia Yia (my wife) was not home, which left him a bit confused as to why she was not around.

Then in June I was gone on the road the first and final weekends of the month, leaving Frosty Lou spending many hours on the arm of the living room recliner watching out the window wondering when Papa (me) was coming home.

I must say though, with both weekend trips – the best part of the weekend may have been walking through the front door and having Frosty Lou go crazy with his love and happiness of having me home. His slobbering kisses at greeting and then not letting me out of his sight for several hours after my arrival home were the true tale of nothing but pure love and enjoyment at being my little companion.

In mid-July we took a trip to the Black Hills of South Dakota and decided to take Frosty Lou with us. While we thought he would be much more excited at times about the whole idea, he instead spent a bunch of time just napping in our arms during the travel to and from the Hills.

Immediately he went to those doors, sniffing and pawing as if he was wondering where the bells were at. Then when Yia Yia went to take him out to do his duty, he wanted no part with going out the other door because these doors were like the ones at home. Major confusion that whole evening.

Now this room in Ogallala was big enough that Frosty Lou had a little bit of room to move around in and try to play, while the bed was not yet high enough that he couldn’t jump on it and cuddle with his Papa and Yia Yia during a good night sleep.

The hotel we stayed at in Hill City, South Dakota was tiny, but efficient for us humans. Unfortunately, it left Frosty Lou with less than sufficient room to run or play so we found him many times pacing around the end of the bed looking for somewhere to have space.

What the hotel did have was access to a decent amount of grassy area that came complete with a creek full of well-paced water and a bridge over it. This gave Frosty Lou some good times outside.

Of course, when we came home, he enjoyed the cuddling of our arms during the drive before getting so excited when he saw we were pulling into the driveway of home. Back to his territory made Frosty Lou a very happy camper.

The biggest change this summer was – Frosty Lou lost his girlfriend, at least that is what we called her.

Mia was a Cavalier that wasn’t much older than Frosty Lou and shared life with a young lady named Susan just a few doors down the street. Over the past year they became frolicking friends, running and chasing each other around our backyard while taking time to friendly wrestle each other until someone would get the better of the other and we would hear a little yelp telling us so.

One day out of the blue about two weeks past, Susan texted us to say she had left her contract job in town and would be moving back to Texas, and while she did not say she wouldn’t be back, it was explained that if she did come back it probably not be for a year or so.

We had Susan and Mia over for one last meal and sharing our friendship the day before they left, and while us adults understood what was happening, Frosty Lou was totally unaware of the fact that it would be the final time for him to frolic with his girl Mia. 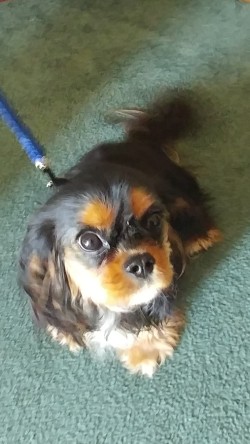 Ever since they were introduced, Frosty Lou would spend hours waiting patiently on his little green chair in the southwest corner of our backyard, just waiting for Susan to bring Mia out for a walk around the local water tower that towers over our neighborhood directly behind our home. He would get so excited when in the house and he would see them walking, he would be so excited that when we would barely get the door open – he would shoot out through a crack opening and seemingly fly to the back fence hoping to have a moment or two with his girl Mia.

Unfortunately, Mia and Susan did leave for Texas and now when Frosty Lou goes outside to do his duty or chase some ‘pet’ frogs and chipmunks we have, it seems inevitable that we would find him sitting on his green chair looking back toward where Susan and Mia had been living, hoping and wondering where his girl has gone.

We have learned to not mention her name too much because when we do, Frosty Lou takes off toward the back-patio door to look for her, thinking we said her name because we may have seen her walking with Susan.

So, while the summer wraps up with the memories of a few trips that may have left Frosty Lou a bit confused as to why Papa or Yia Yia were not home with him, it was the frustration that we see in him that makes my heart melt. The frustration of him still spending time in the corner of the backyard, perched on his green chair just waiting for another time with his girl, Mia, only to eventually come in when called – still wondering where she has gone.

With that – hugs, prayers, blessings and happy thoughts from Grumpy Gramps.

WHAT YOU MAY FIND

Within CrossDove Writers You May Find – –

Sometimes a mixture of colorful opinions about nearly anything and everything with ‘MY BOX OF CRAYONS’…..

Sometimes a set of innovative ideas, challenges, and prompts for writers of all levels with ‘WRITING IDEA CHALLENGE’……

A variety of busy this and busy that which will always come from where I may be at……..