When we made the plunge at the end of May and traveled to Oklahoma to pick up a new family member, our Maltese puppy Frosty, I distinctively remember telling my wife, kids and grandkids that this is one dog that would not end up with clothing, ribbons or booties on at any time.

As hard as it is not to believe, once again I was very adept at proving myself wrong. 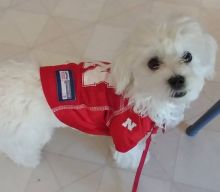 While we were plowing through the heat and humidity of the summer, the discussion of anything beyond a blanket never entered the day – at least not until early September when we had a few days where the weather took a nose dive.

As you may know, a Maltese is really not that big of a dog and Frosty at seven months old is still just 10” from the base of his head to the rear end of his body. We did take notice on those rainy, wet days just how much the bottom of his belly would get wet just from the way he would prance around in the backyard or snoop around and around looking for that perfect place to do his business.

It was those wet days, when the air began to turn just a bit cooler in September that the wonderful, thoughtful wife mentioned that when we hit that time of the season where the grass is covered in frost in the morning, that she was worried about that underside of our favorite household companion.

Now I maybe forgot to mention that during a discussion back in June, just a few weeks after Frosty joined the household, I did voice my opinion of this possibility for clothing the puppy by noting that if I would ever consider it, it would only be for those colder damp days of the fall and spring, or maybe for those harsher days with the bitter cold wind in the winter.

I also voiced loudly that the most we might ever get was like a pull over sweater or heavy hoodie, nothing more and nothing less – and for sure no bows, bandana, or boots, period. And if I did cave in, Frosty would show our Husker colors!

When September rolled into October, an unusual thing happened in our part of the world – we had an early cool spell that actually turned into a cold spot with temperatures dropping into the low 30’s overnight, leaving a backyard full of frost and very damp, chilly grass for the pup to deal with.

It was then, that this guy who vowed dogs should never be dressed up did break apart and go looking for something to keep my dear Frosty warmer than me as the fall would become winter.

Dumbfounded at first, then angry at myself second – I realized getting to this clothing idea late in the game meant the good stuff like a warm looking sweater complete with a hood was already no longer available in our poor puppy’s size.

So instead I did the next best thing, I not only found and purchased an item to keep Frosty warm and much of his underside dry – I purchased two items!! Boy, when I crack and cave in, I do it full force.

While we anxiously await the arrival of the soft Nebraska Husker hoodie, my excitement boiled over today when Frosty and I walked to the mailbox and found a small package waiting for us, a package for Frosty.

As big a Husker fan as I am, I have never owned a jersey type shirt – but this guy spoiled his puppy and now Frosty has the honor of wearing what I never have, a Husker replica jersey!!

We hurried back into the house and I immediately opened-up the package and put the jersey on Frosty, which surprisingly went very well. Now my favorite non-human companion could sit with me on a football Saturday and enjoy the game as a fan should by wearing a Husker jersey.

For now the question of whether or not I would cave in and get actual clothing of some sort for Frosty has been decided and obviously I did cave in and took my love for my puppy to that level I call protective, as I saw the two outfits as just that – a purpose of protection for his little body on those days when the weather will be cold and wet.

For now, the other question will be, am I going to cave in again and purchase other clothing as well? As of today, I can say, the boot or shoe thing is out, the bandana is on the fence tittering toward a no, while other ideas are being thrown at me with a slow enough pace that I will decide sometime just not today.

As one of my grandkids said, ‘but Papa, Frosty would look sooooo cute in any of many Halloween costumes or maybe a Christmas outfit’. My response was ‘really, don’t push your luck’. Time will tell!!

With that – hugs, prayers, blessings & happy thoughts from Grumpy Gramps

What You May Find

With CrossDove Writer You May Find – –

A mixed color of opinions will be found in ‘My Box of Crayons’…..

The discovery of a dogs life when you read ‘Dog Talk with Frosty Lou’…..

Walking a path of private moments and appreciations with ‘Letters Unstamped’…..

Some pics taken from my world, my playground by ‘CrossDove Photography’…..

Plus, the occasional rendering found in ‘Will’s Short Stories’, ‘A Time 4 Rhyme’, and ‘Celebrating a Life Living or lived’!!